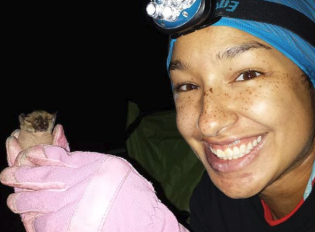 Summer is a special time for me, but not for the reasons you might think.  As the world’s only flying mammal takes to the skies, I feel an excitement as I watch them soaring and dipping – almost exuberantly – as they navigate the night sky.  There are eight bat species found in Ontario, four of them are on the endangered species list. Bats are often misunderstood, perhaps because of the manufactured association with evil, so when I have questions that require specific scientific knowledge I call on Toronto’s local Batgirl: Cylita Guy. Guy doesn’t race around Toronto’s streets in a cape and mask, but she definitely deserves the title.

Guy explained that bats are very misunderstood creatures and debunked two myths for me:

Myth 1: All bats are blind.

Truth: Totally untrue! No bat is blind. Some can’t see that well and use echolocation to get around. However, there are many bats that can’t echolocate. Instead they have these big beautiful eyes to navigate in the dark and they see better than we do!

Myth 2: All bats feed on blood. 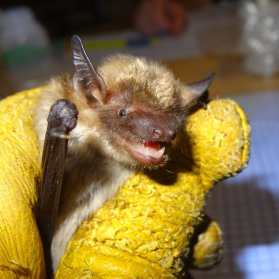 Cylita Guy is a PhD Candidate in the Department of Ecology and Evolutionary Biology at the University of Toronto. She studies zoonotic diseases. Zoonoses are diseases that leap from animals into humans. Cylita studies bats and the viruses that they share with humans, but which rarely affect them individually. Guy also works at the Ontario Science Centre as a Host, where she has been for most of the last decade. She also started the Junior Bat Biologist Program in partnership with the High Park Nature Centre to teach children about the equipment scientists use to study bats and collect real data.

Guy grew up in the city of Toronto, but has family in northeastern Ontario and always loved the outdoors. Her parents spent a lot of time fostering an appreciation for nature in Guy and her siblings and they spent their summers up north fishing and hiking with their grandparents.

It wasn’t until entering university that she realized the breadth and diversity of courses available for her to choose. Initially her plan was to pursue a degree in medicine, and this held true until she began her fourth-year thesis project in conservation.  During her honours thesis she realized that her true passion lay in another direction. Grasping the difficulty of getting people to care about conservation and that the general Canadian populace has relatively poor science literacy, Guy decided to focus her efforts at an interface where humans and wildlife come into conflict. Understanding the issues surrounding bats and the viruses they share with humans can not only help to conserve species, but also benefit humans.

“I try to spark people’s curiosity in nature and watch where it takes them. Oftentimes, that curiosity inspires them to learn more on their own. For instance, a lot of people don’t realize that we have bats in the city of Toronto and after learning that, I often see them start to pay attention to what else is in their environment.”

Guy understands the intrinsic value of protecting the environment, but unfortunately that isn’t always enough for most people to make real change. She explained that it’s important to frame your research in a way that helps people understand why it’s important to them and how it can affect them in some way.

Guy has garnered extensive experience communicating complex scientific concepts to widely diverse groups of people – from elementary school students to other scientists. She has honed her communication skills and developed an ability to fashion her delivery to cater to different types of audiences. Explaining a concept to a group of six or seven year-olds requires a completely different approach than presenting the same concepts to adults. Real communication requires you to explain information in a way that makes the knowledge accessible to everyone. 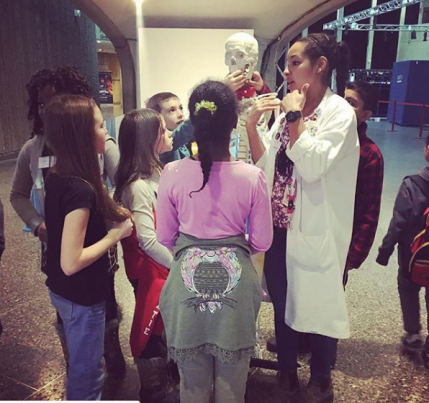 These communication skills developed from conducting many presentations in many different settings has helped in her technical writing as she gets the chance to clearly convey the most interesting parts of her work.

As a woman, a visible minority and a scientist, Guy experienced various challenges in the STEM field and is cognizant of the role that her mentors played in her career. As a child, it can be difficult to imagine yourself working in a field where you don’t see other people like you who you can relate to. Oftentimes, it can make these positions seem inaccessible. Representation in STEM fields is tremendously important to open the eyes and widen the horizons of young women in general and young black women in particular, to new and important areas of endeavour. Different ideas derived from different lived experiences provide a wider framework and could give new insights into important issues in conservation.

“Early on, I didn’t see anyone who looked like me working in my field.  Although there are more women making their way to senior academic positions, they do not always reflect the diversity of women participating in ecology.” 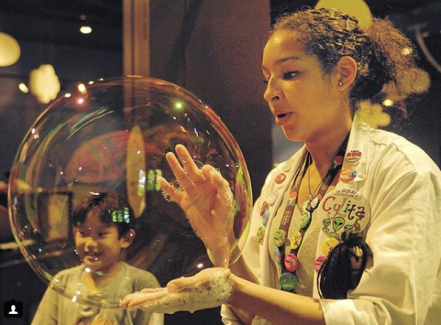 “I was very fortunate to have great mentors. Dr. Becky Raboy encouraged me to apply for a PhD instead of a Master’s. I had a lot of people recognize potential in me that I didn’t yet see at the time.”

Guy talked about the pressure that high school students are often under to be successful. They limit themselves both with respect to choices in tertiary education and the path to a meaningful career. She encourages what she calls “purposeful wandering” in an academic career. There are so many different jobs and careers out there that you won’t be exposed to until later in your educational journey.

“I started to deviate from my path to pursue things I knew would be valuable, but which were not directly related to my course of study. I pursued an independent study project in the field of medieval studies. This project was very useful to me because it helped me develop enhanced critical thinking skills – I got to look at a problem I knew nothing about and use a rigorous scientific framework to figure it out. I do a lot of things that are not directly related to my thesis, and they have all been great opportunities because I was not afraid to step away from my set path.”

And so her pioneering spirit, her sense of fearless adventure which led her to deviate (often) from a pre-set pattern to pursue the unknown, to let her interest and passion guide her, is an example to all aspiring to make their own mark in scientific enquiry and discovery.